skip to main | skip to sidebar

The Betamon Is Extremely Colorful: Three Paintings by Tyler Thomas

[From Richmond, VA, Tyler Thomas, and his Betamon birds.
Click on the images for detailed viewing pleasure.] 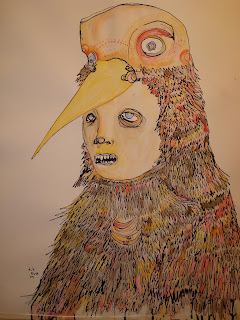 I've been making these paintings of BETAMON birds
using ink and watercolor and some mixed media including beer mixed with spit.


The Betamon bird is a mythical creature
i have created over the past 4 years...
and it wasn't until early this year that I realized
the real idea of what it actually is that I am creating.


You've seen me draw those bald men with the shirt and tie for a long time...
I evolved those men into an idea of American man--
into man on earth as a whole, into the human race--
the idea of humor (through my drawings) both light and dark humor
seen in the images i create with facial expressions and actions... 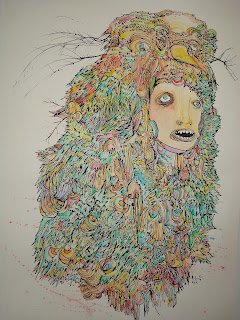 the drawings have become more narrative.
And now I've given that idea of mankind a god to worship.
the betamon is extremely colorful
they come in all sorts of different mutations.
because they don't migrate together,
they are solitary creatures
pratically fresh out of the shell,
their mating call is extremely loud.


So loud in fact that it can
destroy the human eardrum
within a distance of 100 yards.
therefore they are never captured
and are very much evaded. 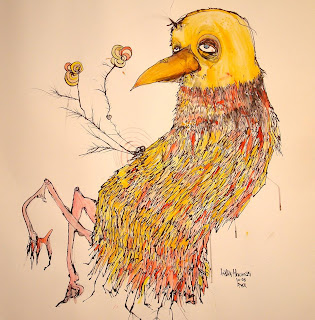 I've only created a few
but I'm making a tribe of men
that hunt and kill the betamon birds
and wear their feathers
as a belief that they own
the great creatures power....
often deaf they develop
a greater connection to the earth.

these betamon birds rock my world. i mean that from the deepest of my heart. thanks for getting them before my eyes, josh. real great thing this wolf in a field, really really great.

Send the transcript of an illuminating email to